Did you know that Stephen King wrote a book set in Wisconsin? I didn’t! I also didn’t know that Neil Gaiman has a home near Menomonie or that YA author Shannon Schuren is a librarian right next door in Sheboygan Falls and YA author Amy Zhang went to high school in Sheboygan Falls! So below, please find some books that have a Wisconsin setting or connection. (Also, you can find an interview in the Sheboygan Press with Shannon Schuren right here!)

Twenty years ago, a boy named Jack Sawyer traveled to a parallel universe called the Territories to save his mother and her “Twinner” from an agonizing death that would have brought cataclysm to the other world. Now Jack is a retired Los Angeles homicide detective living in the nearly nonexistent hamlet of Tamarack, Wisconsin. He has no recollection of his adventures in the Territories, and he was compelled to leave the police force when a happenstance event threatened to awaken those long-suppressed and dangerous memories.

When a series of gruesome murders occurs in western Wisconsin, reminiscent of heinous killings committed several decades earlier, Jack’s buddy, the local chief of police, begs Jack to help find the killer. But are these new killings merely the work of a disturbed individual, or has a mysterious and malignant force been unleashed in this quiet town? What causes Jack’s inexplicable waking dreams—if that is what they are—of robins’ eggs and red feathers? As these cryptic messages become impossible to ignore, Jack is drawn back to the Territories and to his own hidden past.

A master of inventive fiction, Neil Gaiman delves into the murky depths where reality and imagination meet. Now in American Gods, he works his literary magic to extraordinary results.

Shadow dreamed of nothing but leaving prison and starting a new life. But the day before his release, his wife and best friend are killed in an accident. On the plane home to the funeral, he meets Mr. Wednesday—a beguiling stranger who seems to know everything about him. A trickster and rogue, Mr. Wednesday offers Shadow a job as his bodyguard. With nowhere left to go, Shadow accepts, and soon learns that his role in Mr. Wednesday’s schemes will be far more dangerous and dark than he could have ever imagined. For beneath the placid surface of everyday life a war is being fought —and the prize is the very soul of America.

The Virtue of Sin by Shannon Schuren

Miriam lives in New Jerusalem, a haven in the desert far away from the sins and depravity of the outside world. Within the gates of New Jerusalem, and under the eye of its founder and leader, Daniel, Miriam knows she is safe. Cared for. Even if she’s forced, as a girl, to quiet her tongue when she has thoughts she wants to share, Miriam knows that New Jerusalem is a far better life than any alternative. So when God calls for a Matrimony, she’s thrilled; she knows that Caleb, the boy she loves, will choose her to be his wife and they can finally start their life together.

But when the ceremony goes wrong and Miriam winds up with someone else, she can no longer keep quiet. For the first time, Miriam begins to question not only the rules that Daniel has set in place, but also what it is she believes in, and where she truly belongs.

Falling Into Place by Amy Zhang

“On the day Liz Emerson tries to die, they had reviewed Newton’s laws of motion in physics class. Then, after school, she put them into practice by running her Mercedes off the road.” Why did Liz Emerson decide that the world would be better off without her? Why did she give up? Vividly narrated by Liz’s imaginary friend from childhood, a friend she long ago abandoned, this heartbreaking novel pieces together the short and devastating life of Meridian High’s most popular junior girl.

Mass, acceleration, momentum, force—Liz didn’t understand it in physics, and even as her Mercedes hurtles off the road and toward a tree, she doesn’t understand it now. How do we impact one another? How do our actions reverberate? What does it mean to be a friend? To love someone? To be a daughter? Or a mother? Is life truly more than cause and effect? Amy Zhang’s haunting and universal story unfolds in nonlinear flashbacks as Liz’s friends, foes, and family gather at the hospital and Liz clings to life, and it will appeal to fans of Lauren Oliver, Gayle Forman, and Jay Asher. 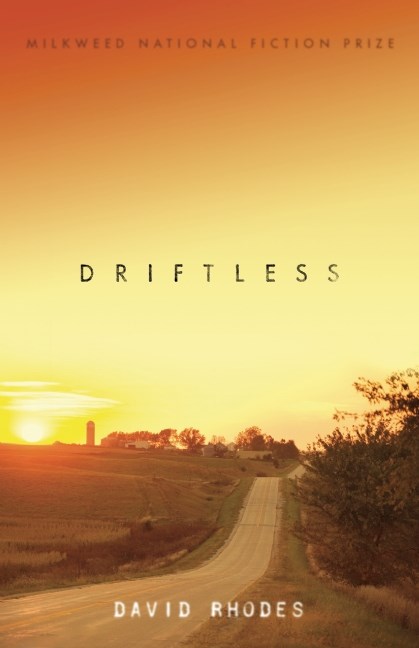 When David Rhodes’s first three novels were published in the mid-seventies, he was acclaimed as “one of the best eyes in recent fiction” (John Gardner), and compared favorably to Sherwood Anderson. In 1976, a motorcycle accident left him paralyzed from the chest down, and unpublished for the subsequent three decades.

Driftless heralds a triumphant return to the Midwestern landscape Rhodes knows so well, offering a fascinating and entirely unsentimental portrait of a town apparently left behind by the march of time. At once intimate and funny, wise and generous, Driftless is an unforgettable story of contemporary life in rural America.

The few hundred souls who inhabit Words, Wisconsin, are an extraordinary cast of characters. The middle-aged couple who zealously guards their farm from a scheming milk cooperative. The lifelong invalid, crippled by conflicting emotions about her sister. A cantankerous retiree, haunted by childhood memories after discovering a cougar in his haymow. The former drifter who forever alters the ties that bind a community. In his first novel in 30 years, David Rhodes offers a vivid and unforgettable look at how each life affects many.