“From the D&D experts behind Dungeons & Dragons Art & Arcana comes a cookbook that invites fantasy lovers to learn about their favorite fictional cultures through their unique cuisines and lifestyles. 80 recipes inspired by the magical world of Dungeons & Dragons–perfect for a solo quest or a feast shared with fellow adventurers.”

END_OF_DOCUMENT_TOKEN_TO_BE_REPLACED

What are librarians reading in March? This month’s picks include the story of a delivery boy thrown into an inter-dimensional Jurassic Park, a twisted horror tale set deep in the Mojave Desert, and a thriller about a family forced into Witness Protection.

Meddy Chan is getting married, and the wedding planners are perfect–until Meddy overhears the wedding photographer talking about murdering someone at the reception. Her aunties spring into action, setting into motion a series of madcap misadventures intended to save Meddy’s special day. A charming combo of close-knit family, humor, and light mystery. — LibraryReads review by Nanette Donohue, Champaign Public Library

END_OF_DOCUMENT_TOKEN_TO_BE_REPLACED

Looking for a good book to tide you through the coldest months? Here are 10 books coming out this month that librarians are especially excited to pick up.

A socially awkward hotel maid finds herself at the center of a murder investigation when she discovers a wealthy hotel guest dead in his bed one day.

Molly loves her job, loved her recently deceased grandmother, and cherishes the way the rules of her work let her blend in with others. Her unique character, along with her obsessive love of cleaning and proper etiquette, make her an ideal fit for the job. She delights in donning her crisp uniform each morning, stocking her cart with miniature soaps and bottles, and returning guest rooms at the Regency Grand Hotel to a state of perfection. But Molly’s orderly life is turned on its head the day she enters the suite of the infamous and wealthy Charles Black, only to find it in a state of disarray and Mr. Black himself very dead in his bed. Before she knows what’s happening, Molly’s odd demeanor has the police targeting her as their lead suspect and she finds herself in a web of subtext and nuance she has no idea how to untangle.

What to read while you wait:
– The Lazarus Hotel: another locked room mystery set in an upscale hotel
– Eleanor Oliphant is Completely Fine: about an isolated young woman and the friendships she develops after she and a coworker help save an elderly man who collapses
– Pretty as a Picture: a locked room mystery with a protagonist who also just wants to do her job

END_OF_DOCUMENT_TOKEN_TO_BE_REPLACED

In the last couple of years, I wrote about some of my favorite horror movies. Instead of movies, to keep things fresh, I decided to talk about horror graphic novels. So get cozy in your favorite reading chair and grab one of these terrifying titles! Like my other posts, I’ve included the synopsis from our catalog.

“Kurôzu-cho, a small fogbound town on the coast of Japan, is cursed. According to Shuichi Saito, the withdrawn boyfriend of teenager Kirie Goshima, their town is haunted not by a person or being but by a pattern: uzumaki, the spiral, the hypnotic secret shape of the world. It manifests itself in everything from seashells and whirlpools in water to the spiral marks on people’s bodies, the insane obsessions of Shuichi’s father and the voice from the cochlea in our inner ear. As the madness spreads, the inhabitants of Kurôzu-cho are pulled ever deeper into a whirlpool from which there is no return!”

END_OF_DOCUMENT_TOKEN_TO_BE_REPLACED

Shark Week may be over for the year, but that doesn’t mean you can go back in the water quite yet. You might know the more famous shark movies, like Jaws or Deep Blue Sea. Today’s blog post is a school of more unusual shark movies. Below each title, you’ll find a summary of the movie from our catalog. Let’s dive in.

Sharks of the Corn

“Strange things are happening in Druid Hills, Kentucky. People are saying there are “large Great White sharks swimming in the corn stalks!” Meanwhile, serial killer Teddy Bo Lucas is arrested for killing dozens of people using shark jaws and teeth as weapons. Chief Vera Scheider is caught in the middle, trying to figure out if her missing twin sister Lorna might be one of them.”

END_OF_DOCUMENT_TOKEN_TO_BE_REPLACED

What’s your favorite coping method? Lately I’ve got two. First, I’ve been daydreaming and scheming over the past 14 months about having a mini road trip adventure. Soon I will leave my dark hovel and re-enter the bright, shining world, and when that time arrives I know which books are coming with. Which leads me to coping mechanism #2; keeping an eternal, endless reading list that will never get shorter, only longer. Always longer. Check out my list below for some summer reading inspiration of your own. What’s that? It’s not officially summer til June 20th? Why don’t you tell someone who hasn’t been living in their head for the better part of a year and a half, because I will never listen.

Below, I list my top three genres and the books I’ve been saving to read on the road, along with their runners-up.

Some will know T. Kingfisher as Ursula Vernon, author of the very popular juvenile graphic novel series, Dragonbreath. She felt the need to create a pen name to distinguish the adult titles from the juvenile titles, and after enjoying work published under both names, I can see why. Kingfisher spins dark fairytale-adjacent stories filled with sinister characters, terrifying big boss-style monsters, and genre-defying badass women. Check out some of her short fiction HERE. I’ll look for a spooky roadside motel near the woods to read this one at night.

Here are some additional titles to make your skin crawl: 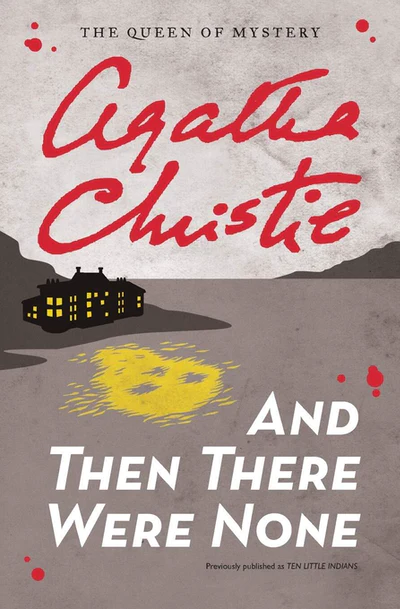 And Then There Were None (1939) by Agatha Christie

Summertime is murder mystery time, specifically Agatha Christie time. There’s just something about the warmth and the light that makes me want to read her work. One would think that after being a Christie stan for more than two decades I would have already gotten to this gold-star standard, but no. Along with Death on the Nile, The ABC Murders, and A Caribbean Murder, And Then There Were None is considered among her greatest novels. I have seen minimum one movie adaptation but have since forgotten whodunnit, but should know the solution to the mystery by the end of my vacation, if all goes according to plan. Ideally, picnicking somewhere gorgeous.

And Then There Were None is also a fascinating example of how beloved media can, and should change over time. The original title of this book featured the worst racial epithet I can think of and was also known at one time as “Ten Little Indians”. To read more about the racism subsequent publishers have done their best to purge from Christie’s work, take a look at THIS article. It’s an apt topic to explore and discuss while everyone is so het up about “cancel culture”. Some things should be relegated to the past, and unnecessary and negative portrayals of racial stereotypes is one of those things.

More mysteries to read in the sunshine: 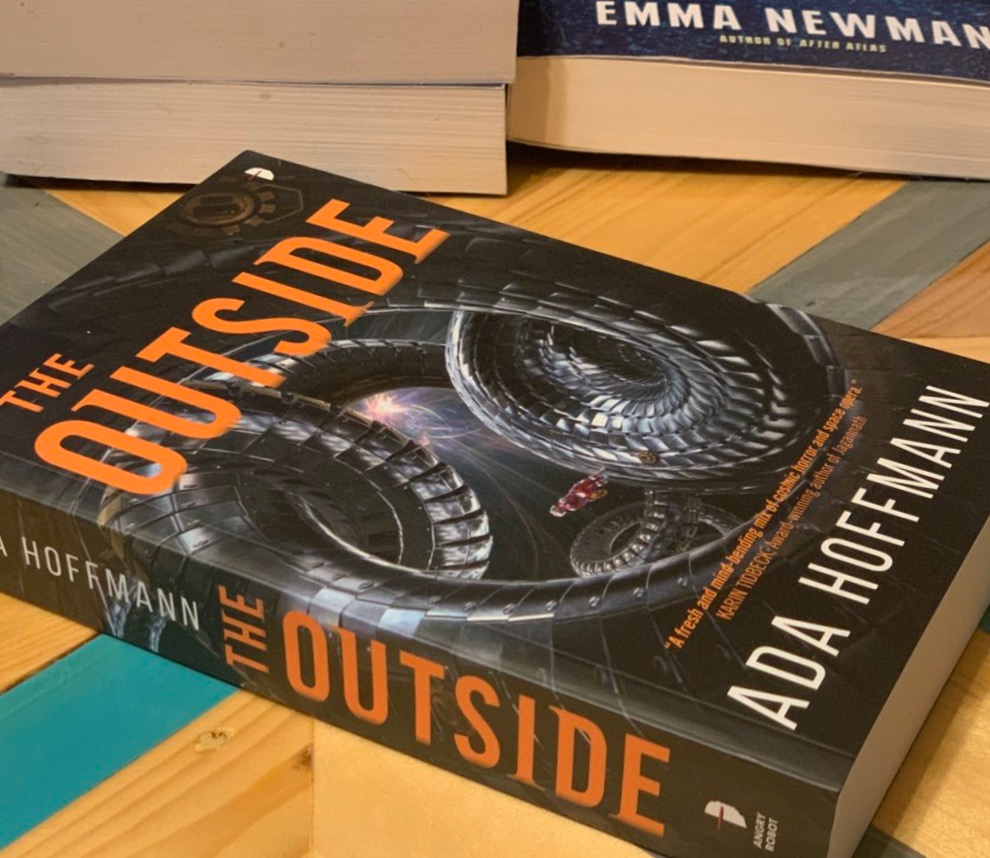 This book checks a lot of boxes for me; outer space, giant space station, giant space station disaster, artificial intelligence, neurodivergent protagonist, woman author. The past decade has been a cavalcade of excellent women and femme-penned speculative fiction and scifi, all to the credit of the genre. Reading about far off galaxies and hitherto unknown beings gives me a sense of calm and peace that I can’t articulate. I’m going to read this at an outdoor patio while I wait to be brought something delicious to eat and drink.

And EVEN MORE space operas:

Will I actually end up reading the books I have picked out? No way to tell. Chances are that I will find many distracting and cruddy paperbacks in secondhand stores while I gallivant far and wide.
All listed titles are available through the Monarch catalog unless otherwise specified. Don’t see any titles that float your boat? Why not give the Your Next Five Books tool a try? Never hesitate to reach out for tech help, book recommendations, or encouraging words. Email publicservices@meadpl.org or call 920-459-3400, option 4. Oh, and have a fantastic vacation.

With the ongoing pandemic, game releases have been a bit sparse. Despite that, there are still some games coming out this year worth getting excited for! I’ve selected a few of the games Mead will be getting and included their descriptions from their publishers.

Seek out and take in-game photographs of Pokémon in their native environments in the New Pokémon Snap game, only for the Nintendo Switch system! Snap photos from the NEO-ONE as you encounter and research lively wild Pokémon. You might see unexpected expressions or behaviors—Pokémon patrolling their territory, playing, or lurking in out-of-the-way spots.

Travel to the islands that make up the Lental region. In this region, some of the Pokémon and vegetation will appear to have a special glow. Research these Pokémon alongside Professor Mirror as you explore dense jungles, vast deserts, and more! Your observations of Pokémon thriving in the wild may help unravel the truth behind the Illumina phenomenon. The Pokémon pictures you take will be used to build your very own Pokémon Photodex!

Save photos to your personal in-game album to edit and adjust them. When you complete a course, you can adjust the brightness, blur, zoom and other aspects of your photo in Re-Snap mode. Then, add stickers, frames, and filters to add a personal touch. Share your favorite photos with family and friends in-game*. You can also see what kinds of photos everyone else is taking. See something you like? Award a Sweet! medal.

END_OF_DOCUMENT_TOKEN_TO_BE_REPLACED

It’s finally October! Start carving your pumpkins. Pick up a bag of your favorite candy. And put something scary on the TV because there’s not much else to do with the pandemic still going on. Like last year, I’ve written up a list of a few of my favorite horror movies.

Crowley is not a good movie. It’s one of those movies that’s so bad it’s good. The premise itself is fairly outrageous, a guy using virtual reality gets possessed by the ghost of Aleister Crowley via the internet. The actors chew up the scenery. Crowley’s antics lean more towards raunchy than evil. The music is the one genuinely good part since it’s handled by Bruce Dickinson from Iron Maiden.

END_OF_DOCUMENT_TOKEN_TO_BE_REPLACED

The 2020 Hugo Awards were officially announced last week. 17 Hugo Awards are distributed (plus some extras) but one of my favorite categories is the Award for Best Graphic Story or Comic. Here are the 6 shortlisted titles for this year’s award.

END_OF_DOCUMENT_TOKEN_TO_BE_REPLACED

With Comic-Con@Home starting today, I thought I would share some of my favorite movies based on comics. As with my other list posts, I’ve included the description from the catalog of each film under their listing.

“A wealthy industrialist is held captive in enemy territory and escapes by building a high-tech suit made of armor. When he returns home, he decides to use his money, talents, and suit to save the world.”