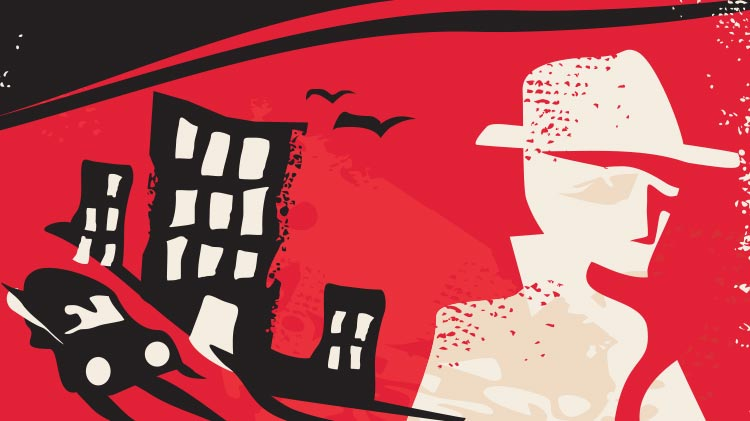 While there is never a bad time to dig into a mystery, summertime is when I want to break out some Agatha Christie while basking in the sun to enjoy the off-screen demise of a country squire or unsuspecting rich auntie. This summer, escapism is more important than ever, so listed below is a brief breakdown of how to access some excellent murder mystery media at Mead. While I have highlighted some personal favorites, these searches can be adjusted to any particular genre of your liking.

What’s the best thing about Hoopla besides access to thousands of books, movies, and music CDs? NO WAIT TIME! Another thing I like about Hoopla is the intuitive search features. Click on “Browse” to the left of the search bar and select “Television”. The next screen will list all the subject categories so naturally, I chose “Mystery” which is listed as a “Top Category”. The top result was Death in Paradise Season One (2011) which is a great top result because the show is fabulous. Who wouldn’t love a fish-out-of-water cozy in a lush, tropical setting? Make yourself a pina colada to drink while you watch for verisimilitude. What if I’ve already seen this show and want to see more like it? Click on the thumbnail and from the next screen click on “BBC Studios”. This will take you to a new list of results; all media produced by BBC Studios. There’s also a way to search by publisher, which can be found under “Advanced Search” at the top of the page. Try searching “Acorn” in that field to get an astonishing list of BBC mystery series. There’s tons of Agatha Christie-inspired media like Marple and Poirot as well as more modern, gritty series like Wire in the Blood and Vera. Everyone should take some time to explore the wide range of television content Hoopla has on offer. You might be surprised because it is A LOT.

Not looking for a TV show or movie? Select “Audiobooks” from the “Browse” menu. From the next page it’s fun to see what everyone else has been reading, so under “SORT BY” select “Popularity” and feast your eyes. Lucy Foley’s excellent The Hunting Party (2018) appears near the top of this list, with good reason. Fans of locked-room, or snowed-in mysteries will get a kick out of the unreliable narrators and the sense that you are overhearing something not meant for your ears.

I also like to use the “User Ratings” setting of the “SORT BY” drop-down menu. Not everyone rates their checkouts on Hoopla so the results don’t line up with “Popularity”. Apparently, users really like The New Adventures of Sherlock Holmes by Anthony Boucher. Will someone please read one of these to tell me if they’re any good?

Folks, I do not enjoy camping because in my mind, that is how one gets murdered by some unkillable psychopath who thirsts for the blood of co-ed campers. Confusingly, I cannot stop listening to true crime audiobooks that describe the psychology and pathology of the worst sorts of criminals. Hop on over to RBDigital to download some of the finest true crime you’ll ever encounter. First, there’s Robert Hare’s Without Conscience (1993). Hare is the man credited with creating the Psychopath Checklist and therefore a giant in his field. He’s also interviewed in Jon Ronson’s The Psychopath Test (2011) which is available on Hoopla. Now that some context has been laid, read Whoever Fights Monsters (1992) by Robert K. Ressler. This fella, right here, is credited with coining the term “serial killer” in the late 1970s. He also acted as a consultant to Thomas Harris while he wrote The Silence of the Lambs. More recently, he was fictionalized as Agent Bill Tench on the popular Netflix series Mindhunter. Quite the career!

Too much murderer talk? Check out Death’s Acre (2004) by William M. Bass. This man is responsible for the creation of the so-called Body Farm located at the University of Tennessee Knoxville. Bass’ contributions to the field of forensic science are pretty staggering. His research facility allowed scientists to study the decomposition of human bodies in open air, buried in barrels, submerged in water, and on and on. This research has been extrapolated to aid in murder investigations around the world. Death’s Acre focuses on the science behind crime scenes as opposed to the psychology of the criminal which I thought made the content less graphic. Plus, Bass seems like a big old sweety and I enjoyed his tone.

Once again, if murder mysteries or true crime are not your favorite things, rest easy in the knowledge that all three of our digital book platforms have thousands upon thousands of titles to choose from. If that is a daunting task, I will let you in on a little secret: librarians LOVE the chance to provide old-school library services such as reader’s advisory in this ever-modernizing library landscape. Please do not hesitate to reach out for book picks, or for help using our array of super awesome digital services.