Epidemiology has been pushed to the forefront of conversations since the coronavirus pandemic began. Epidemiologists identify emerging diseases, how they spread, and how best to prevent people from getting ill. For my blog post this week, I’ve found some books that cover how epidemiologists work and about past pandemics. As with my other list posts, I’ve included a summary of the book from its publisher. 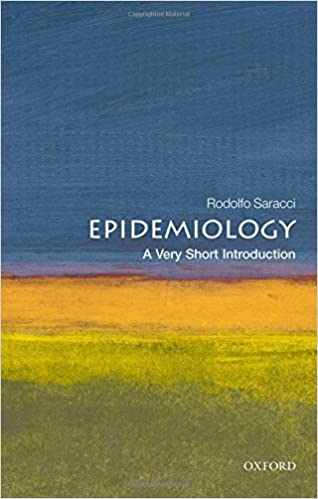 “Epidemiology plays an all-important role in many areas of medicine, from discovering the relationship between tobacco smoking and lung cancer, to documenting the impact of diet, the environment, and exercise on general health, to tracking the origin and spread of new epidemics such as Swine Flu. It is truly a vital field, central to the health of society, but it is often poorly understood, largely due to misrepresentations in the media. In this Very Short Introduction, an internationally recognized authority on epidemiology, Dr. Rodolfo Saracci, provides a wealth of information on this key field, dispelling some of the myths surrounding the study of epidemiology, and explaining what epidemiology is and how vital it is to the discovery, control, and prevention of disease in world populations. Dr. Saracci provides a general explanation of the principles behind clinical trials, and explains the nature of basic statistics concerning disease. He also looks at the ethical and political issues related to obtaining and using information concerning patients, and trials involving placebos.” 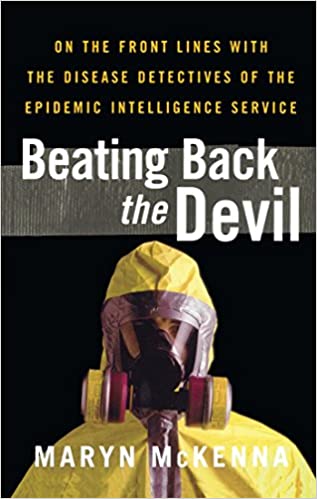 Beating Back the Devil by Maryn McKenna

“The universal human instinct is to run from an outbreak of disease like Ebola. These doctors run toward it. Their job is to stop epidemics from happening.

They are the disease detective corps of the US Centers for Disease Control and Prevention (CDC), the federal agency that tracks and tries to prevent disease outbreaks and bioterrorist attacks around the world. They are formally called the Epidemic Intelligence Service (EIS)—a group founded more than fifty years ago out of fear that the Korean War might bring the use of biological weapons—and, like intelligence operatives in the traditional sense, they perform their work largely in anonymity. They are not household names, but over the years they were first to confront the outbreaks that became known as hantavirus, Ebola, and AIDS. Every day they work to protect us by hunting down the deadly threats that we forget until they dominate our headlines, West Nile virus, anthrax, and SARS among others.

In this riveting narrative, Maryn McKenna—the only journalist ever given full access to the EIS in its fifty-three-year history—follows the first class of disease detectives to come to the CDC after September 11, the first to confront not just naturally occurring outbreaks but the man-made threat of bioterrorism. They are talented researchers—many with young families—who trade two years of low pay and extremely long hours for the chance to be part of the group that are on the frontlines, in the yellow suits and masks, that has helped eradicate smallpox, push back polio, and solve the first major outbreaks of Legionnaires’ disease, toxic shock syndrome, and E. coli O157 and works to battle every new disease before it becomes an epidemic.

Urgent, exhilarating, and compelling, Beating Back the Devil takes you inside the world of these medical detectives who are trying to stop the next epidemic—before the epidemics stop us.” 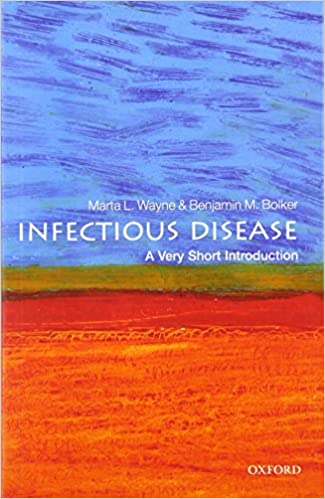 “As doctors and biologists have learned, to their dismay, infectious disease is a moving target: new diseases emerge every year, old diseases evolve into new forms, and ecological and socioeconomic upheavals change the transmission pathways by which disease spread. By taking an approach focused on the general evolutionary and ecological dynamics of disease, this Very Short Introduction provides a general conceptual framework for thinking about disease.

Ecology and evolution provide the keys to answering the “where”, “why”, “how”, and “what” questions about any particular infectious disease: where did it come from? How is it transmitted from one person to another, and why are some individuals more susceptible than others? What biochemical, ecological, and evolutionary strategies can be used to combat the disease? Is it more effective to block transmission at the population level, or to block infection at the individual level? Through a series of case studies, Benjamin Bolker and Marta L. Wayne introduce the major ideas of infectious disease in a clear and thoughtful way, emphasizing the general principles of infection, the management of outbreaks, and the evolutionary and ecological approaches that are now central to much research about infectious disease.” 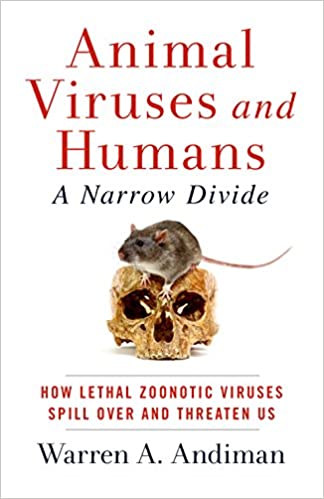 Animal Viruses and Humans, A Narrow Divide: How Lethal Zoonotic Viruses Spill Over and Threaten Us by Warren A. Andiman

“To reproduce promiscuously and to wreak havoc wherever they can find a home,” this is the raison d’être of viruses, writes Dr. Warren Andiman, an HIV/AIDS researcher who has been on the front lines battling infectious diseases for over forty years. In Animal Viruses and Humans: A Narrow Divide, Andiman traces the history of eight zoonotic viruses—deadly microbes that have made the leap directly from animals to human populations: Middle East Respiratory Syndrome (MERS) * Swine influenza * Hantavirus * Monkeypox * Severe Acute Respiratory Syndrome (SARS) * Rabies * Ebola * Henipaviruses (Nipah and Hendra). He also illustrates the labor intensive and fascinating detective work that infectious disease specialists must do to uncover the source of an outbreak.

Andiman also looks to the future, envisioning the effects on zoonoses (diseases caused by zoonotic viruses) of climate change, microenvironmental damage, population shifts, and globalization. He reveals the steps that we can, and must, take to stem the spread of animal viruses, explaining, “The zoonoses I’ve chosen to write about . . . are meant to describe only a small sample of what is already out there but, more menacingly, what is inevitably on its way, in forms we can only imagine.” 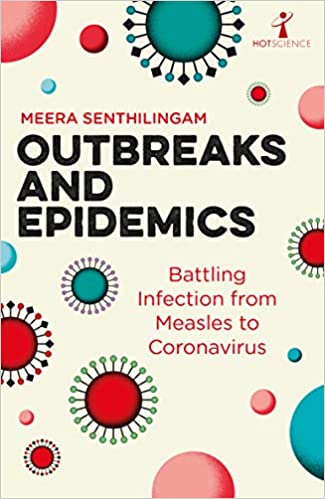 Outbreaks and Epidemics: Battling Infection from Measles to Coronavirus by Meera Senthilingam

“For centuries mankind has waged war against the infections that, left untreated, would have the power to wipe out communities, or even entire populations. Yet for all our advanced scientific knowledge, only one human disease – smallpox – has ever been eradicated globally.

In recent years, outbreaks of Ebola and Zika have provided vivid examples of how difficult it is to contain an infection once it strikes, and the panic that a rapidly spreading epidemic can ignite.

But while we chase the diseases we are already aware of, new ones are constantly emerging, like the coronavirus that spread across the world in 2020. At the same time, antimicrobial resistance is harnessing infections that we once knew how to control, enabling them to thrive once more.

Meera Senthilingam presents a timely look at humanity’s ongoing battle against infection, examining the successes and failures of the past, along with how we are confronting the challenges of today, and our chances of eradicating disease in the future.”