I’m not a big fan of straight horror movies – they just don’t interest me that much. I feel like I have to be in a very specific mood to both buy into them enough to be frightened but also to enjoy being frightened. Horror-comedies, on the other hand, I really enjoy! So when Halloween rolls around, I’m looking for movies that will make me laugh. Such as… 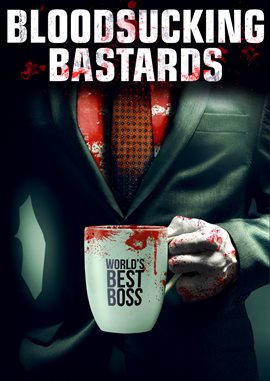 I’m starting off with this one because it’s a smaller film and it seems like a lot of people haven’t heard of it. Which is a shame, because it’s a lot of fun! The main character, Evan, works at a depressing call-center-type office job, but he works hard and is almost certainly about to get promoted – until his boss decides to hire someone from outside the company to shake things up instead. Can you guess what’s up with the new manager? Of course you can, it’s right in the title of the movie! The fun comes from watching Evan and his friends figure out what’s going on and how to fight back – and also realize some things about what their jobs were like even before their manager was a literal monster.

Tucker and Dale Vs. Evil (also on Hoopla and Kanopy)

When a bunch of college kids go out into the woods to party, they run into a pair of terrifying murderous hillbillies – and things get bloody. Wait, no, they actually run into Tucker and Dale, who are just two working-class rural guys on their own backwoods cabin vacation. But these kids know the horror movie tropes, so when one of them goes missing, a whole bunch of comic (and gory) misunderstandings ensue. It’s a lot of fun, especially in the way it plays around with (and makes fun of) horror movie assumptions.

I enjoyed this movie quite a bit, but I feel like there are some important things to know about it. I like B-movies, and this is definitely in that realm – it was originally a made-for-TV movie on the Sci-Fi channel. For whatever reason, a lot of the marketing around it was as though it was a straight horror movie, but it really isn’t (and the title should be a giveaway for that). If you, like me, enjoy movies that are cheesy and a little low-budget, this is a fun one. I particularly enjoyed Kevin Sorbo (yes, from TV’s Hercules) as a washed-up reality-TV-star/hunter. And I also think they do an excellent job of making the villain come off as not just a (literal) monster but also a total creep. 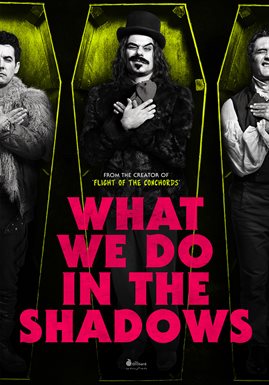 What We Do In the Shadows (also on Hoopla and Kanopy)

I know this one has been mentioned on the blog before, but… it’s just so good! It’s a mockumentary about three vampires living together as roommates. It manages to combine the problems vampires face (like fitting in at a nightclub well enough to pick people up) with the problems roommates face (like getting everyone to follow the dang chore wheel!). It really is just good on every level – writing, acting, direction. And although I haven’t seen it yet, we also have the first season of the TV series based on this movie, so you could give that a shot as well!